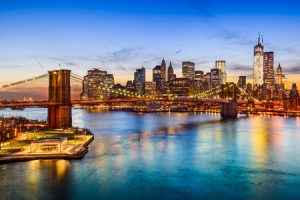 Think New York City already has enough high rises? Well, SL Green Realty doesn’t think so, and now they’re getting ready to develop a gorgeous glass skyscraper called One Vanderbilt that will rival the height of the Empire State Building and forever change the skyline of New York City.

According to the New York Times, the new building will connect commuters funneling into the city from Grand Central to a new Midtown East, and the project hopes to revitalize construction in the neighborhood. But this building isn’t solely designed for function. In fact, its glass construction was designed to highlight the nearby historic façade of Grand Central Station as well.

SL Green Realty doesn’t want that to happen again. So while the base of the new building at One Vanderbilt will match the masonry that graces the façade of Grand Central, the upper floors will be made of glass, rather than stone. The building’s designers hope that the glass architecture will allow Grand Central to shine on its own, while also illuminating the beauty of its next door neighbor.

Keep an eye on the skyline, New Yorkers—come 2020, it will look a bit different and feature some beautiful new glass design.

To learn more about glass design and construction, contact us today at Bent Glass Design!

Will some of the windows use SPD technology and provide instant dimmable capability?

Will Bent Glass Design provide any of the glass for One Vanderbilt, and will some of it be dimmable?

It is still too early to say if we will be involved or if they will use a dimmable solution, though I would expect dimming to be a long-shot.