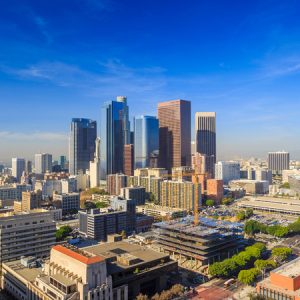 Downtown Los Angeles is home to a new US Courthouse, and it looks distinctly different form the 1930s-era building it was designed to replace. Just a few years ago, the site of the new courthouse was nothing more than a hole in the ground in the heart of downtown LA. Today, it’s been reborn in a stunning contemporary design that appears to defy gravity.

The 10-story, 633,000-square-foot courthouse features an all-glass façade that distinguishes it from many of the other civic buildings in LA. The building’s designers envisioned its cubic, glass construction as a monument to “solidarity, constancy and the rule of law,” according to a recent article in the Los Angeles Times.

Perhaps the most striking feature of the building’s design rests at its foundation. Rather than sitting at street level, the glass cube is elevated one story above it. From surrounding angles, this gives the building the illusion of levitating just above the ground. It’s a subtle design decision that adds an element of surrealism to an already eye-catching piece of architecture.

Inside, 24 courtrooms are stacked in two columns separated by a 10-story atrium that runs through the center of the building. The space between the two columns can be traversed using a series of sky bridges that cross each level. The building’s glass façade fills each courtroom with natural light from multiple directions. On the roof, a massive solar array is expected to generate more than half a million kilowatt hours of electricity each year. Below the building, a 105,000 gallon cistern was installed to capture and recycle rainwater.

At Bent Glass Design, we can work with you to create custom glass pieces for architectural projects, interior remodels and more. Browse our gallery online or give us a call today to learn more about all that Bent Glass Design has to offer.