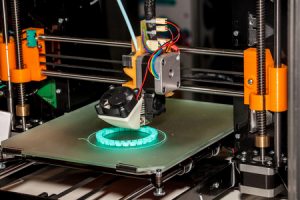 Designers have found all sorts of unique ways to utilize glass in architectural applications, and the improvements that have been made to glass over the years have made it possible for them to push the limits of design. From towering skyscrapers to iconic structures like the Louvre Pyramid in France, architectural glass has shaped the modern world for decades. Now, a new development in 3D printing is promising to test the design limits of architectural glass once again.

Back in 2015, an MIT research group called Mediated Matter unveiled a 3D printer that was capable of using molten glass as a medium. Recently, they followed that up by unveiling some work done by the printer, which they have dubbed Glass II. The one-ton printer is capable of creating objects that weigh almost 70 pounds, and the group used it to create an installation at Milan Design Week that showed off what it can do.

The installation created by Mediated Matter’s printer consists of a series of glass columns and a motorized light that moves up and down and shines through the glass. Thanks to the capabilities of the 3D printer, the glass features textured surfaces and varying thickness levels throughout the columns, which causes the printed glass to reflect the light differently than conventional glass. As Neri Oxman, the lead researcher for Mediated Matter, told Fast Co. Design the 3D printer allowed the group to “design and print components with variable thicknesses and complex inner features” that turned the glass structures into “optical lenses.”

At this point, MIT is still testing the capabilities of Glass II and isn’t planning on commercializing it anytime soon. But the possibilities for the 3D printer seem endless, and if it ever does go to market, it could change the way that designers create and use architectural glass. Glass surfaces could conceivably become much more complex, especially once color is incorporated into them.

3D printers capable of printing architectural glass may not be available just yet, but Bent Glass Design specializes in creating curved glass that is eye-catching, versatile, and durable. We can bend and curve glass into almost any shape and help you choose the best glass for your architectural applications. Call us at 215-441-9101 or contact us online to learn more.